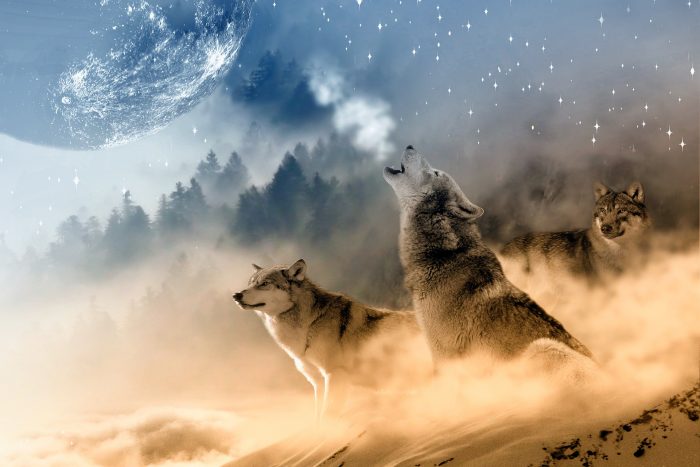 Clare Rhoden is an Australian sci-fi author. Her trilogy, Chronicles of the Pale, imagines a future ravaged by climate change and conflict.

BELINDA: Tell us about Mashtuk.

CLARE: Mashtuk is one of the canini, who are genetically-modified wolf-dogs with prolonged lives, enhanced mindspeaking powers and an augmented dew-claw that acts as an opposable thumb – very handy in the post-Conflagration world he inhabits. Mashtuk is the story-teller of the pack, the one who remembers lore and teaches the cubs. He is also a scout and hunter. We first meet him as an impetuous youngster and follow him across several decades. Mashtuk has a huge heart and boundless curiosity. His compassion and wisdom are pivotal in the Chronicles of the Pale.

BELINDA: Why was it important for you to include non-human characters in your story?

CLARE: That’s a great question, because I think the inclusion of non-human characters is often misunderstood as childish or twee – too cutesy for adult readers. I don’t see non-humans in that way at all. I’m unimpressed by our human assumption that we are the pinnacle of creation on Earth. I wanted to point out that our reliance on technology and our own cleverness has distracted us from the fundamental truth: we are humble mortals. I think we need reminding that we are part of nature and that our actions affect all creatures on the planet: “conquering” nature means defeating ourselves. As we seem to be doing!

CLARE: Another excellent question, thank you, but it’s a hard one. I suspect that it depends on the non-human character’s role in the story. In the Chronicles of the Pale, I wanted the post-Conflagration creatures to enact various aspects of current debates. The humachines of the Pale are powerful, augmented bionic humanoids. The second group are the Settlers, who prize human physical traits to the extreme of discarding ‘non-standards’ – people with different abilities or on the extremes of physical measures such as too tall, too short, too fair, too dark, and so on. Third, the Tribesfolk try to live a sustainable nomadic life, accepting all creatures but with a great distrust of technology. The two completely non-human groups are the equii, descendants of horses who gave up their mindspeech because they didn’t want to put their feelings into words, and (my favourites!) the canini, including the wonderful Mashtuk.

Oh, there are also the ferals: half-mechanical, half live-ware killing machines. Watch out for them. Basically, they are live weapons.

As well as fulfilling their roles in the storyline, I think it’s important for non-humans to act as non-humans. For example, the canini need to use different gestures to indicate their feelings, and to use words in a canini-fashion: as pure and unshadowed meaning, without the undertones that humans give words.

CLARE: Ha! Oh yes. The classic one is the sacrificial non-human, where an animal or alien character is killed off to increase the sense of danger to the (more important) human in the story. You wouldn’t believe the number of times I cringe while watching my partner’s favourite crime shows, as companion animals are murdered to make their humans look more vulnerable. Grr.  So the first would be a writer killing the pet or the Martian sidekick to increase pathos or fear. The second is making non-humans act like inferior humans rather than their own beings – pets who speak baby-talk for example.

CLARE: I’m very interested in books which look at non-human ways of living and interacting, so yes please! Recent examples I’ve really enjoyed are Becky Chambers’ Wayfarers series which includes some brilliantly imagined aliens and also has a fascinating storyline about an AI character. There is also Charlie Jane Anders’ The City in the Middle of the Night, set on a far planet where the sentient local life has been misunderstood as ‘mere animals’ and given Earth-style names.

In these books, there is no limit set on the roles that non-humans can undertake in the storyline. I love that.

CLARE: I grew up on Rin Tin Tin, Lassie, Mr Ed, and K9, and my appetite for interacting with animal and other non-human characters has never diminished. For example, I adore your ruc-pard Fink in the Hero series! I fell heavily in love with the equine Companions of Mercedes Lackey’s Valdemar books, in particular Yfandes. However my all-time favourite is Nighteyes from Robin Hobbs’ Farseer series. I often ask myself, ‘what would Nighteyes do?’ when considering any question of integrity or compassion.

Clare Rhoden writes, blogs, reads too much, and reviews books.

Inspired by society, politics, culture, and history, she writes thoughtful stories about characters with heart and soul. From immersive world-building in science fiction and fantasy, to well-researched details in historical novels, Clare’s books pivot on hope and love in the darkest of times.

Clare lives in Melbourne Australia with her husband and their very clever spoodle.

Featured image by InspiredImages from Pixabay

A Commentary on Humanity: Russell Nohelty on Non-Human Characters >>