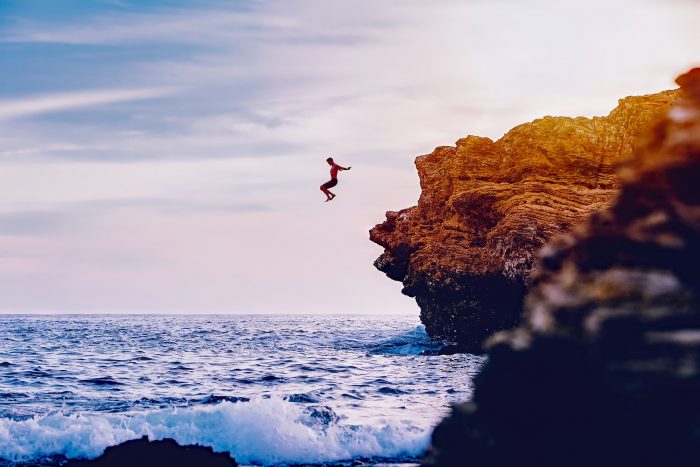 On August 8 2019 at 9:30am, I launched my first Kickstarter. It wasn’t perfect and I wasn’t ready for it, but I hit that big green button anyway. I wouldn’t have said it was a rollercoaster, it was more like a slow climb up an emotional slippery-dip, as you will discover below.

My aim with this campaign was less about funding a project, and more about building and energising a tribe/crowd/fan base. The funds were a nice side-benefit, and having other people put their money down was a great motivator for getting it done.

At about the same time I recorded the introductory video, I started keeping a journal. It’s a little all over the place, but hopefully it gives you a small insight into my experience.

(Note: The intro video is the bit at the very top of the Kickstarter page.)

That woman isn’t me. That’s the first thought that goes through my head as soon as I get over cringing at looking at myself on the screen. It’s not that I look any different, my features are still mine–same green eyes, wide nose and the extra padding under the chin–but the animation isn’t. The sparkle in the eye and the flashing hands, those all belong to the person once called Rowdy Boots.

She’s obviously been hiding under the tired, occasionally depressed person that is me, only coming out when nerves, caffeine and the moon come together in mystical alignment.

Rowdy Boots is exhausting, but she makes good videos.

I’ve been working on this sucker for six months. Initially, I was going to launch in May, and then June and then July. It’s now August.

I haven’t warmed up my mailing list (aka got them excited about the idea), my social media presence is spotty at best and I have no intention of paying for advertising. Not an ideal situation for a successful Kickstarter, but I’m launching.

I’m closing my eyes and hitting the button because if I don’t, I’ll think of a dozen more excuses why now isn’t the right time to launch. The longer that goes on, the less likely it is the project will happen.

Sometimes, jumping in the deep end is the only way to swim.

It’s a good thing I like the deep end.

There’s no downside to this campaign. Not funding isn’t a failure.

My gut also objects to icecream. It’s priorities are a little skewed.

Stubborn is my superpower.

The Kickstarter is almost a third of the way to its funding goal (28%), you’d think I’d be happy. But no, my head is full of gloom. This is not an unusual state of affairs. My head is predisposed to gloom.

I keep reminding myself that there’s no lose in this situation. Even if every one of my seven backers drops their pledges, I will still have 20 illustrations to put in a special edition of Race. I still win.

My head isn’t listening yet. It will, eventually. Until that happens I’m keeping up the chant.

UPDATE: Someone just backed at the Hero Crate tier, taking the project from 28-38% funded. My gloom just took a long hike off a short pier.

I don’t know who you are mysterious backer, but I love you.

The project’s been stalled at 47% funded for the last two days. I’m no longer hounded by that sense of gloom (turns out I’d forgotten to take my happy pills. Whoops) but I’m still not expecting the project to fund.

I’ve started making a list of things I’ll do differently on my next Kickstarter (yes, there will be another). It looks a little like this.

The halfway mark. Still at 47% funded. I’m about to send an email to my mailing list, which so far hasn’t been very responsive. I’m adding one more slot to the Join the Cast tier, which I hope will prompt some action from the list.

And hey, I’ve had an idea for a Break Kickstarter-style campaign for a short story, where the rewards will help determine the characters and plot! I don’t know how that would go, but it sounds pretty awesome and could be a good tribe-building exercise.

Almost 70% funded. Had a few big pledges yesterday, which was great. I’ve gone from feeling pessimistic to optimistic, still have my fingers and toes crossed though!

The campaign has been hell on my writing schedule, although some of that has been trying to submit grant applications as well. I think I’ve managed to write 2k words on Cold Between Stars in the last 12 days. Looks like September is going to be a catch-up month.

Funded! With a lot of help from family, friends and friends of family. A couple of late pledges came through last night, pushing the project over the line.

1 day after the campaign ended

A non-Kickstarter preorder for Race came through! How cool is that?!  (Very, very cool.)

And that was it. The whole journey (mostly).

There are quite a few things I need to work on before my next Kickstarter (which will be for either Tales from Cumulus City or Cold Between Stars), the most important of which is motivating my mailing list. I’m really pumped that I had a couple of people from my mailing list back the campaign, but I need more. How I go about that feels a lot like trying to find the centre of a maze blindfolded, but like the Kickstarter, the only way to figure it out is to do.

I’m quietly confident that I can build from this start and, one day, attain Micheal J Sullivan levels of funding (a.k.a. astronomical).

Have you run a crowdfunding campaign before? What was your experience?