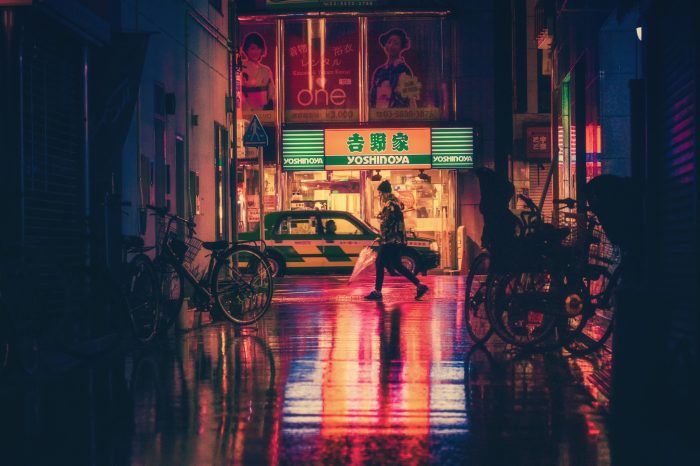 BELINDA: Tell us about Voice of the Sword.

JOHN: Voice of the Sword is Book One of the “Sword, Mirror, Jewel” trilogy, starring Japanese-American teenager Reiko Furukawa Bergman, based on updated characters and stories from Japanese mythology, legend and folklore. It’s for an age range for twelve upwards, and I call it Science Fantasy, not ‘Urban Fantasy’, because romance is not the focus of the plot and there are no fae, vampires or shapeshifters in the book. I’m working with a supernatural pantheon that has been under-represented in English language genre literature so far, and refreshingly new to many western readers.

Reiko Furukawa Bergman is a ‘kikokusei’ – a bicultural teenager who has lived for most of her life in the USA, so she has an outsider’s perspective on Japan. This means the reader can easily empathize with her as she deals with customs and cultural traditions that most westerners would perceive as weird. And that’s even before she gets involved with Tengu, Kappa, clones, living shadows, and a samurai-sorceress from an alternative Japan in another dimension  …

BELINDA: What inspired you about Japanese culture?

JOHN: If you mean what inspired me to write fiction about it, then I suppose it was the feeling–when I first arrived here–that there is a vast pantheon of creatures and legends in Japanese mythology, folklore and urban legend that have not been tapped by western fiction. We’re familiar with vampires, werewolves, zombies and fae, and there is such a voracious readership for them that those archetypes are not going out of fashion any time soon. But on the other hand, Japan has the Tengu–a race of proud warrior bird-people; the Kappa, treacherous, water-dwelling lizard-people; the Kitsune, sensuous, shape-shifting fox-people; and that’s only scratching the surface. There is so much potential for world-building and character-arcs in the Japanese pantheon, and they’re getting more well-known now because of the internet and global cultural osmosis, but the field is still wide open for development.

JOHN: It’s important in fiction, because it’s important in the real world. If we assume that diversity and cultural mingling is a good thing, then it should be reflected in any genre of fiction. Stories that deal with other worlds can include any fantastic race of sentient beings that the human imagination can conjure; but if that’s the case, then we have individuals from eye-opening and mind-expanding cultures living right next door to us here in the real world. If we don’t embrace that in our fiction, it’s going to look hopelessly outdated.

JOHN: This is a difficult question, and a very thorny subject. I guess one answer is, there’s nothing you can do, so write what your inner voice is telling you to write. If someone out there really wants to beat a writer over the head with the ‘cultural appropriation’ stick, they will find a reason, even if logic or common sense doesn’t support them. Maybe one way to avoid this, or at least control the damage, is to be honest. I mean, I’m a white middle-class guy writing about a Japanese-American teenage girl dealing with the ancient creation myths of Japanese mythology. What gives me the authority to write this? Well in my defense, I am a permanent resident of Tokyo, and I have worked in schools and colleges where some students have been bicultural teens, fluent in English, and they often talked to me about their lives, their experiences, their ambitions and fears for the future. So, ‘write what you know’ does kind of apply here.

Secondly, I don’t set myself up as some kind of expert in my field. I’m not fluent in Japanese, and I have never studied Japanese language or culture at University, let alone MA or PhD level.

So, I’m just a guy doing a job. I walk around Tokyo with my eyes open and I learn by seeing, hearing and doing things. I read a lot and I try to avoid mistakes that other writers have made–mistakes in naming conventions and honorifics, ‘san’ and ‘sama’ for example; and I try to get the motivation right, so the Japanese characters behave like real Japanese people. A few months ago, I came across the term ‘Weeaboo’ in Internet slang, and I couldn’t stop laughing for a couple of hours. If any reader wants to call me out for being a Weeaboo, then I say – fine! Knock yourself out. See what happens.

JOHN: Besides Japanese mythology, I would like to see more on Aborigine and Oceanic Mythology. The concept of the Dreamtime is fascinating, and has endless potential for any writer. Also, I’d like to see more on Tibetan Buddhism. The Buddhist spiritual universe has its own versions of vampires, demons, were-animals and zombies … how about some of them, rather than endless copies of the Christian versions?

BELINDA: What are some of your favorite sci-fi or fantasy books featuring Japan?

JOHN: Recently published books that I’ve loved have been “Jet Black and the Ninja Wind” by Leza Lowitz and Shogo Iketani, a modern epic of a teenage ninja stretching from the wilds of California to deepest rural Japan: the “Red Winter” series by Annette Marie, a historical fantasy saga set in the Edo Jidai that explores some of the core concepts of the Shinto religion and brings the pantheon of Kami in as major characters: the “Lotus War” series by Jay Kristoff, melding Edo Jidai Japan and Shinto Mythology with Steampunk fantasy: “United States of Japan” and the sequel “Mecha Samurai Empire” by Peter Tieryas, set in an alternative universe showcasing Japan’s flashy, high-tech Cyberpunk side. Plus, of course, I can totally recommend Excalibur’s very own Cody L. Martin and Charles Kowalski, who have written the science fiction thriller “Zero Sum Game” and the historical fantasy “Simon Grey and the March of a Thousand Ghosts”, respectively.

John Paul Catton is a British writer currently living in Japan. He travelled extensively before settling down in west Tokyo, teaching Media Studies at a local college. He is the co-creator of Excalibur Books, a Tokyo-based indie publisher that is the home of high-quality Fantasy, Science Fiction and Horror. He spends his time now writing Science Fantasy, some of which (but not all!) is inspired by the rich world of Japanese mythology, folklore and urban legend. He loves good food, obscure rock music, and collecting pop culture trivia of all kinds.