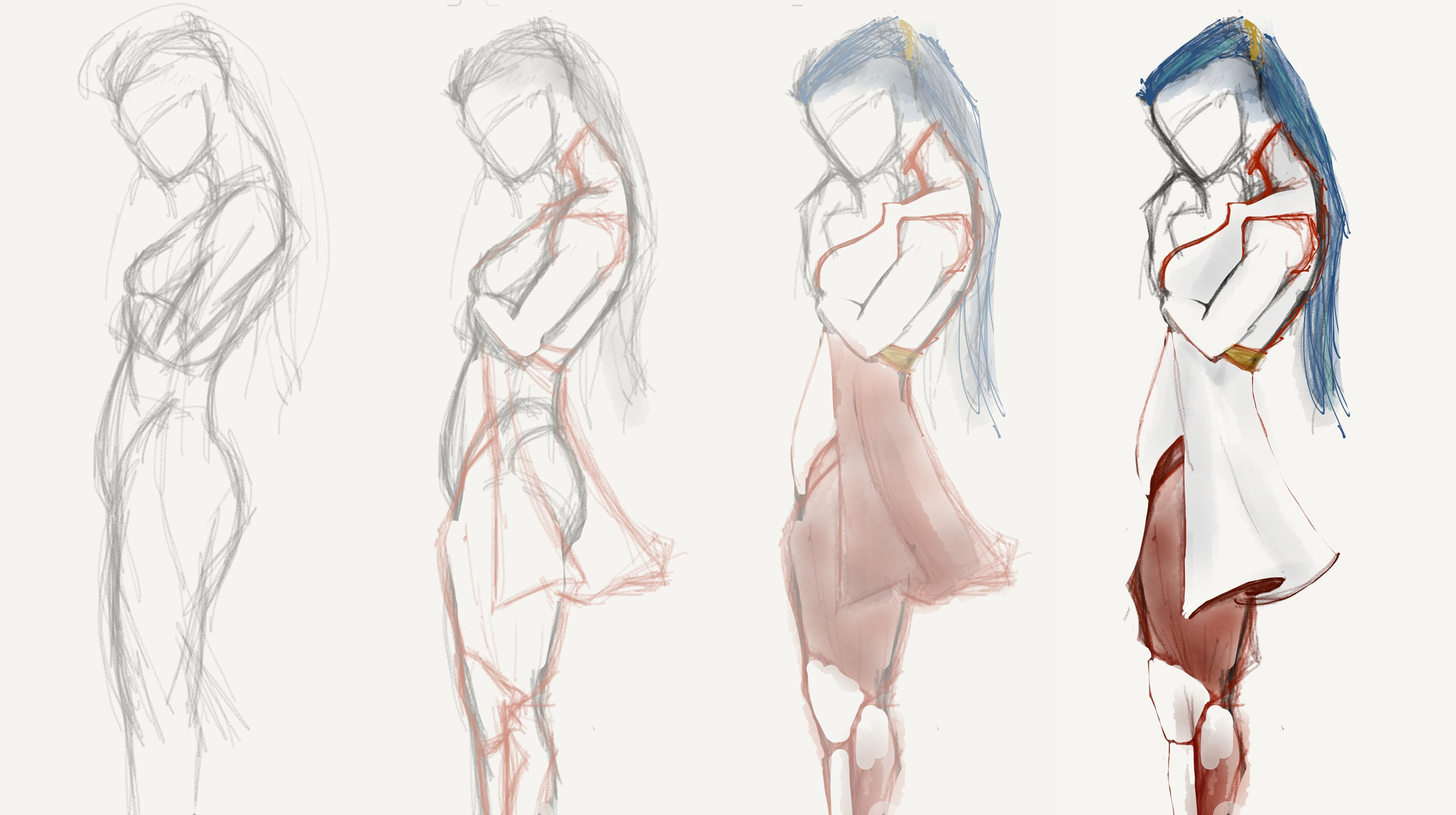 Crumpled and torn lockers lined the way; doors shredded by massive talons and scorched by fire bolts, an entire row buckled around a body-shaped impression, the faded yellow paint smudged with blood. A lot of blood, and under it the shattered remnants of a sword, the rippling sunmetal lifeless, splattered with the same blood that coated the lockers.

A trail of it led through the rest of the minefield,  a scarlet swath just big enough to have been made by her sister’s body.

Byrne starred at it, hypnotised by the bright red, the way it wended through the charcoal and splinters that were the only remains of the heavy wooden benches and pooled in the ceramic crater at the end, before it continued into the showers.

Della’s hand tightened on hers, a silent gesture of comfort Byrne shook off, along with the dread spiralling in her gut.

Her boots made a solid clack on the tiles.

Where the locker room had been a battlefield, the showers with their half dozen spigots jutting from the wall and barest suggestion of privacy, where…not. There was a stillness, a sense of peace that struck her like a blade to the chest.

Fion stood at the end furthest from the door, arms crossed over her chest, the long blue tail of her mohawk snarled and blackend by the same blood crusting on Byrne’s own battleskirt. She looked up in a slow, jerky motion, like the effort to tear her gaze from whatever lay in the last cubicle hurt. Perhaps it did. Tears had made tracks on her face, long black lines of mascara running through the grime on her cheeks, and she had her thumb between her teeth, ripping into the nail until it bled.

She stepped back at Byrne’s approach, pressing her back into the wall. Byrne was aware of Fion reaching out, of Della wrapping the other girl in her arms, but most of her attention was on the bloody tangle of limbs slumped under the shower.

Suun knelt beside their sister, glowing hands over Nova’s chest, expression tight with strain as she fought to keep her alive. How much longer she could, Byrne didn’t know. Their sister was…mangled.

Nova’s legs were stretched out before her. One boot was gone, exposing the talon marks ripping her leg from calf to thigh, bone gleaming a stark white amidst bloody flesh, while her other leg…Byrne swallowed.

The lower half bent the wrong way, like someone had taken a sledgehammer to her sister’s shin, snapping it in the middle.

The damage continued the further up Byrne dragged her gaze. Nova’s golden battleskirt and the skintight armour underneath were shredded, the bloody marks in her sister’s skin too neat to have been made by claws. One shoulder hung awkwardly and there were just bones where her hand should have been, her forearm ending in an almost cauterised stump.

Nova’s head lolled, but she straightened it, gazing at Byrne with eyes that had once blazed like the sun but were now a dull brown. Blood bubbled at her mouth, the froth trickling down her chin to drip onto her chest and pool around the shattered remnants of the golden medallion that should have protected her.

‘I told you.’ The words left Byrne’s mouth, ripe with the resentment and pain writhing in her chest. ‘When will you listen?’

Nova smiled, revealing the gaping holes where her front teeth should have been. ‘In another lifetime sister.’

Resentment flared to anger and Byrne darted forwards, boots splashing in the mix of water and her sister’s blood as she crouched at Nova’s side. ‘This is another lifetime.’

[popup_trigger id=”2515″ tag=”a” classes=”featured-image-centre”]Don’t forget to check out the episode notes for more behind the scenes content.[/popup_trigger]

Thanks to everyone who sent me their suggestions after the last episode! You inspired me, although maybe not in the way you thought. Check out the episode notes to find out why I responded to your ideas the way I did.

Now, onto this episodes’s question!
I’m struggling a little bit with whether or not Nova lives. I thought it might be kinda cool if she survived but minus the hand and with issues walking. Or maybe it would be a greater tragedy if she died? What are your thoughts?

And hey, what do you think of Byrne’s comment that “this is another lifetime”?