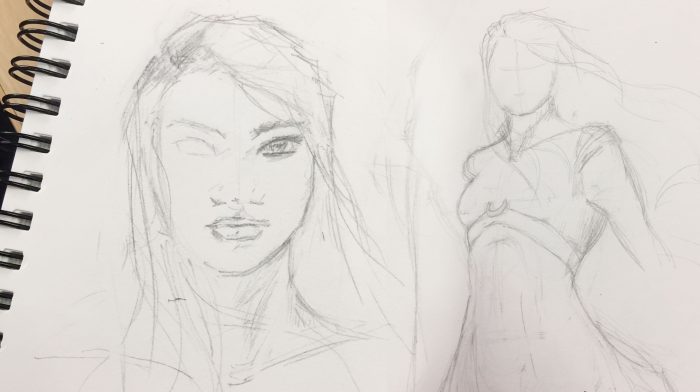 Commander of the mighty Imperial armies.

And they’d grounded her.

Byrne flopped back on the soft pink doona and glared at the constellations on her bedroom ceiling. It wasn’t fair, she’d only…Byrne blinked and tried to remember what it was she’d done to earn the ferocious scowl on her dad’s face and her stepmum’s disappointed sigh.

The memories slipped through her fingers like fog, leaving only snatches behind. She remembered blood, thick black stuff sizzling on her leg, and swinging her staff through a horde of monsters, faces deformed by tusks and fangs and horns. Exhilaration had sung in her bones, had made the staff light in her hands and turned the wails, grunts and screams of killing into a symphony.

Byrne shivered, disgust and delight dancing under her skin. She clasped the pendant sitting on her chest. The sharp lines of moon and stars carved into the rounded bit of stone were a familiar comfort, the cold weight of it, the way it warmed against her palm a reminder that she wasn’t crazy.

It was always like this after she came back, struggling to remember why there were bruises on her neck or her knuckles bloody. Struggling even harder to remember why she’d woken up on the floor of a jail cell with a confused police officer leaning over her, demanding to know where the other girl went.

She didn’t tell him she was the other girl. For one, her clothes were different. Battleskirt and tights replaced by the pleated tartan skirt and white shirt of her school uniform. And two, if whatever she’d done in the days before had landed her in a jail cell, she wasn’t going to own up to it.

A police record would look really bad on her university applications.

But mostly she didn’t say anything because the officer wouldn’t have believed her if she had. She’d tried, two years ago when this whole mess had started. She’d sat her dad down and laid it all out, but all that had done was land her in therapy. And all coming clean to the therapist had accomplished were raised brows and pills she flushed down the toilet every morning.

Byrne signed and rolled onto her side, staring into the floor-length mirror propped against the wall.

She looked different when she was the other her, when she was the Sword. She had to. It was the only explanation for why no one recognised her as one of the girls plastered all over the news, tagged with words like gang and vigilante.

She rolled to the other side of the bed, sat on the edge and studied herself in the mirror. Golden skin, dark eyes, black hair that fell straight to her waist, and bruises circling her neck. She snatched a photo from the mirror’s frame and peered at the blurred image that had dominated the news feeds for the last few months.

The Sword stared back at her, same rounded face and wide hips, but the look on her face was different, the way her brows were scrunched together, the snarl on her lips, the rage in her eyes.

It was the rage that always took Byrne aback, always made her wonder whether her dad and the therapist were right. Whether she should actually swallow those pills instead of introducing them to the sewer system, because that anger…

A shiver claimed her spine. The thought of that emotion living inside her scared Byrne, it looked like it could end the world and then dance on its grave. And the more she looked at it, the more she thought about it, the more Byrne thought she could feel it, an ember in her chest just waiting for—

This one’s a bit different. One, it’s not directly related to the episode and two, it’s a two-parter.

Question 1: What about the story so far is confusing the heck out of you?

Question 2: What is it that you just have to know right now?

I will attempt to answer the most pressing questions in the next episode.

Featured Image: Fooling around with sketching Byrne. I started out trying to sketch her pendant and ended up sketching Byrne herself. I like the face, but I think it needs tweaking.