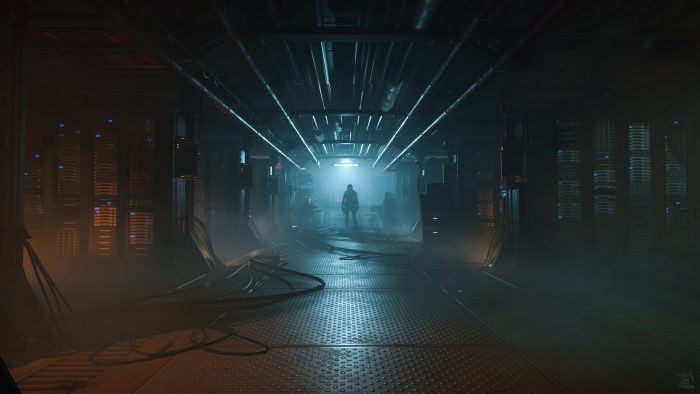 Way back when, I used to play a story-based roleplay game set in the Star Trek universe. I never got into the nuts and bolts of Star Trek (I was just there for the writing), but I had time to appreciate the work of those who did, and let me tell you, Trekkies are pretty amazing. They created entire schematics for the starships on the show, and quite a few that never appeared in any of the series!

My mind was consistently blown by the detail and dedication that went into their work.

Starship schematics aren’t my bag, but when it came time to create Cold Between Stars, I whipped out my trusty Starship Construction Manual (a roleplaying guide) and got to work.

I used a roleplaying game (RPG) rulebook to design the ship because I liked the structure of it. And dice and spreadsheets and— Well, you get the idea. I’m a bit of a nerd.

All nerdiness aside, using the RPG rules to build Citlali gave me an idea of what a starship should include and how to make it as believable as possible. Things like, how big are the engines and how much room do they take up? The same for crew quarters, labs, stasis units, etc. How much power does it take to run the ship, and how many hits can the shields take before Citlali explodes?

Most of these details won’t come into play until book two, Dark Between Oceans, but it’s good to sort them out at the beginning.

It was also a good exercise in worldbuilding, forcing me to consider what sort of resources a deep space exploration vessel needs and how they acquire them. Citlali can’t rely on finding resources (food, water, fuel) along the journey, at least not at regular, reliable intervals, they have to produce it all themselves. Two of the biggest are food and water.

Citlali has three agricultural decks, which produce all of its food, organic resources and Pollen. It also serves environmental functions such as filtering air and water supplies. In the years it takes to travel between solar systems, when the crew is in stasis/sleep, the agricultural AI works on producing all of the resources the crew will need during their next active cycle.

The entirety to the ship’s water supply (when not in use) is stored in the ice hull, a thick outer hull that wraps around the ship. The ice itself is sandwiched between two steelcrete layers, one protecting it from space, the other separating it from the working areas of the ship.

The ice hull performs two functions, one it stores water and two, it’s an extra layer of protection.

There are no rail guns, phasers, photo torpedos or planet-killing lasers on Citlali, its defensive systems are also basic, and pretty much come down to the thickness of its hull.

Why? Well, I asked myself why would a civilisation that has had no contact with extraterrestrials (not counting the ones on Jørn) and no experience of space warfare, put weapons on an exploration vessel? After all, NASA didn’t put weapons on the Apollo or, indeed, any of its other expeditionary vessels.

The answer I came up with is, they wouldn’t.

Also, storytelling bonus, being weaponless and lacking defences adds tension, particularly as we get into book two.

How fast can you go?

Figuring out how fast Citlali could travel was a big part of the design process. It needed to travel faster-than-light (FTL), but it needed to go slow enough that it took years (not hours, a la Star Trek) to travel between solar systems.

Why? Because it’s part of the story. There’s no use having stasis pods if your crew is only going to need them for a couple of days every 18 months. Another reason was, going slower makes the universe seem bigger and more dangerous. If help (or home) is only a couple of days away instead of a couple of decades, it’s not so critical when you run out of water.

To calculate Citlali’s speed, and hence her engines, I played around with this handy-dandy FTL travel calculator and my star map.

Most of my work designing Citilali was, in essence worldbuilding. Few of the details have made it into the book, but nutting them out gave me a clear(er) mental image of what I was writing. Plus, I had fun.