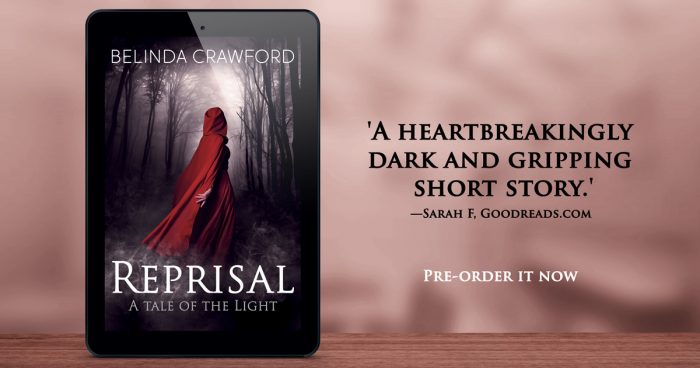 I have something different for you. You know I write science fiction, but did you know I write fantasy as well? In fact, the very first book I started writing (and haven’t finished) was a fantasy novel.

Reprisal is not that novel, but it was my first officially published story. I say “officially” because officially the first story I ever published was a short little number I wrote during Home Ec (I think) as part of a post-apocalyptic fantasy role-playing game.

I was so proud of that story (more of a character intro really) because at 500 words, it was longer than anything I’d ever written. I still have it, floating around my hard drive somewhere, and no you may not read it because it sucks. The character was really cool though, and now that I think about it, that post-apocalyptic fantasy setting rocked too.

No. Wait. Hang on. Let me just put a pin in that, ‘cause that’s not the story I wanted to tell you about today.

Today I’m talking about Reprisal and how it was inspired by a terrible teen movie called The Covenant.

If you haven’t see The Covenant, it stared the two dudes above (Sebastian Stan & Steven Strait), before they were famous and waaaay before Steven Strait could act, and revolved around a plot with teenage wizards whose magic drew on their life force and eventually killed them.

Oh, and only boys could be wizards, because apparently magic was allergic to the double X chromosome or breasts or something.

I’m sure you can imagine how that one went down with me; lead balloons have more buoyancy.

In response, I created my own version the film’s mythos, expanding the idea of magic that fed off a male user’s life force by creating a female version that, simply put, didn’t (there’s also this whole thing where female wizards can become immortal, but… spoilers). And that’s how the world of Reprisal was born.

Reprisal is brief glimpse into that world. It was first published under a different title in 2013, and in two weeks it will be available once again, with a brand spanking new cover and blurb.

A single slip. A night of terror.

Elouise is a dutiful wife, a good mother, and a witch, but in this time of superstition, when men of power incite fear and the slightest hint of witchcraft invites the wrath of the mob, she is forced to hide her magic. She hides it well, until a moment of inattention exposes her secret and sets her on the path to tragedy and revenge.

You can pre-order Reprisal now at Amazon, Apple, Barnes & Noble or Kobo and get it on March 16, or get it a week early by joining me on Patreon.

Get Reprisal a week early!

Reprisal is different from my other work and I hope you enjoy it!