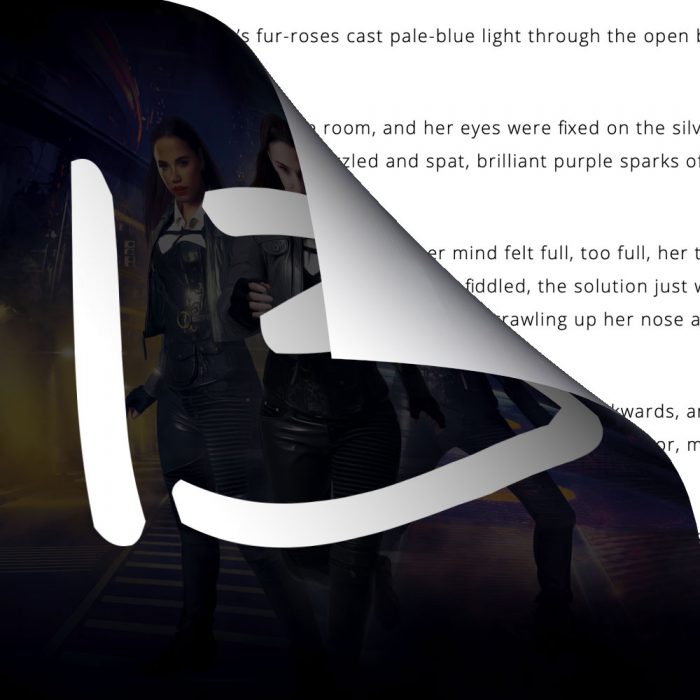 You’ll remember this scene from Riven, where Hero goes a little nuts and attacks her mum, but originally, the object of Hero’s anger was her dad, Leonard.

I was determined to get Leonard into the series, even if I had to switch him from the good guy to the bad one. Unfortunately, there were way too many characters in Riven and he got the chop during editing.

Don’t miss a day! There a couple of 24-hour only offers coming up; to make sure you don’t miss out, get on the 2020 Advent Calendar notification list and have every new reveal delivered to your inbox.

Night had set outside and her mum’s fur-roses cast pale-blue light through the open balcony doors, but Hero didn’t notice.

The workbench was the only real light in the room, and her eyes were fixed on the silver tube still sitting in its red square. The stick’s aura fizzled and spat, brilliant purple sparks of energy crackling in the hollow ends.

The solution was right in front of her, it had to be, but her mind felt full, too full, her thoughts running over each other. No matter how hard she stared or fiddled, the solution just wouldn’t come. The fur-roses weren’t helping, their sweet, cloying scent crawling up her nose and getting tangled in her thoughts, making them thick and slow.

Hero stood, jumping off the stool with enough force to send it rocketing backwards, and marched towards the open balcony. She had her hand on one sliding plasglas door, muscles tensed to slam it closed, when she caught a glimpse of the rose bushes. She froze.

Fink, a dark shadow curled up on the balcony, nudged her arm and rumbled, the question clear in his mind.

He cocked his head. What were closed?

‘The roses. The flowers haven’t opened yet.’

Fink looked at the roses, then back at her. Was that bad?

She shook her head. ‘No. I mean, I don’t think so.’ But she’d smelled them – how could she do that if the flowers weren’t open? She took a step onto the balcony.

From inside came a sharp crunch and the thunk of something heavy hitting the floor.

Hero scrambled back inside, as a man with her brown hair and dark eyes rose from the junk strewn floor. ‘Dad?’

Leonard Regan smiled at her. He looked tired. ‘Hi bunny.’

Hero curled her lip. ‘I hate that name.’

He slumped onto the stool beside her workbench, his eyes crinkling at the corners. ‘I like it.’

Fink poked his head around the balcony door and rumbled a tentative hello.

Leonard frowned at him before leaning back to touch the wall. It shimmered.

Fink jerked backwards before the doors sliced off his nose.

Hero frowned at her dad. ‘He was just saying hello.’

‘Your mother should have left him at the estate.’

Hero recoiled. ‘He goes where I go.’

‘You don’t need him, bunny. You need to be more independent.’

Outside the doors, Fink slumped against the doors, ears and whiskers drooping.

She crossed her arms (she was doing that a lot lately) then uncrossed them and put them on her hips. ‘I do and I am.’

Her dad smiled, but there was sometimes in his eyes, something in the way the crinkles deepened at the corners and the light reflected in them, that said he didn’t believe her. ‘Where’s your mum?’

She plopped onto her ‘stool. ‘Working.’

Leonard’s smile turned wry and he nodded. ‘Of course. And Tybalt?’

Her dad’s brows rose into his hairline. ‘He’s not keeping an eye on you?’

She leaned forward and the ‘stool scooted towards the ‘bench. She swept the drones to one side and powered it back on. ‘I thought you wanted me to be independent.’

‘I meant from Fink. Now that you’re…’ Hero felt her back stiffening as her dad trailed into silence. She looked at him from under her brows, watched as his mouth turned down like he’d just tasted something awful, and didn’t need to touch his mind to know that he still didn’t believe her, or her mum, or Tybalt, when they’d told him she wasn’t crazy. ‘You need to make other friends, human ones.’

‘I have friends.’ Hero glared at her dad. ‘Human ones.’

‘One.’ He emphasised the point with a single finger pointed towards the ceiling.

‘More than Norah Joshi. You need friends who don’t…’ His brow scrunched and he waved his hand in the air like he was trying to pull something out of it.

Her dad looked frustrated for a second longer before he sighed and slumped forward, resting his elbows on his knees, his expression tired and sad. ‘Who don’t hear voices,’ he said, and sighed again. ‘Hero.’

‘I’m telepathic, not crazy,’ she said from between gritted teeth. Except for the way the scent of roses was back, crawling up her nose.

‘Bunny, there’s no such thing, not among humans.’

The taste of thyme joined the scent of roses. ‘Don’t call me bunny.’

Her father hopped off his ‘stool, his hands outstretched. ‘Listen, bun— Hero.’ He raised his hands before she could open her mouth. ‘Just listen to me. You’re not alone okay? And you’re not the first one who’s…heard things. Your uncle, Paris, you don’t know him but—’

‘He was mum’s twin. There was an accident and he ended up in a coma.’

Her dad blinked. ‘Your mother told you.’

He looked like he was going to ask her how she knew, but then he shook his head and took hold of her shoulders. The sense of him flooded Hero’s mind, the scent of hazelnuts mingling with the roses twining about her brain and the thyme on the back of her tongue.

‘Hero, your uncle didn’t end up in a coma because of the accident.’ Her dad took a deep breath. In through the nose. Out through the mouth. ‘The voices he heard, they told him to go to the surface.’ He shook her, just a little. ‘He got Pollen poisoning. Do you understand?’

Her dad frowned back. ‘No,’ he said. ‘Hero, I want you to come with me. I don’t know what your mother thinks she can accomplish letting you stop the meds, but you need to start taking them again and there’s someone—’

The scent of roses was so strong, she could see it, a fine blue haze between her and the world, between her and her dad. With it came something else, an acidic churning in her chest that made her sick and giddy at the same time. She breathed, and felt that the air should have been fire.

She put both hands on her dad’s chest and shoved. Hard. ‘I’m. Not. Crazy.’

Peripherally, she was aware of Fink on the other side of the ‘glas doors. Ears alert. Eyes focused on her. His ruff half fluffed out.

Her dad stumbled back, hands falling to his sides. Surprise disturbed the frown on his face, but only for an instant. His mouth firmed, and he stepped back towards her. ‘I’ve had enough of this.’ His hands reached for her shoulders.

The acid in her chest boiled, just as the taste of thyme exploded in her mouth and something very much like glee curled her hand into a fist.

Fink threw himself at the door.

Her dad turned as the ‘glas shuddered.

Hero’s fist sailed past his chin.

‘What?’ He stumbled backwards.

Blue soaked Hero’s vision. Roses were tangled in her mouth and in her brain. She felt the smile pulling at her lips, drawing them back over her teeth. There was something else too, a crack, somewhere way, way back in her brain.

Her dad raised his hands, palm out. ‘Hero, stop.’

Her fist tightened. She could already see it, bigger, browner, rocketing towards her dad’s nose.

Someone grabbed her from behind.

The scream that came out of her mouth was a long blue torrent of hate. She tried to twist, tried to turn, but the arms–Tybalt’s arms–held her tight as her dad backed away.

There were words, Tybalt’s chest rumbled with them, but she didn’t hear what they were. All she could hear, all she could think was blue. She breathed it. In and out, it scorched her nose, her throat, her lungs; suffused her chest, her bones, her fingers.

Her dad’s mouth moved, but his words too were lost in the rush. His eyes were wide, white around the edges, but he took a tentative step forward.

Glee rooted her to the spot.

Her dad was gone.

Frustration ripped another scream from her throat.

The blue burned in her chest and in her brain. Burned and burned and burned. She kept on screaming, pouring it out of her throat and her nose until it faded and she could see other colours, breathe other scents. There was the warm spicy tang that was Tybalt, the white glow of the workbench, the brown-gold of the floor with its veins of red beneath her knees, and Fink’s big black eyes peering into hers.

The blue was gone. Her chest felt empty, her throat raw. There was steelcrete in her bones, dragging her limbs to the floor, making her sag in Tybalt’s arms.

Fink whuffed, his whiskers tickling her nose and she was pretty sure Tybalt said something, but all she could summon was a sigh before her eyes closed.

Don’t miss a day! There a couple of 24-hour only offers coming up; to make sure you don’t miss out, get on the 2020 Advent Calendar notification list and have every new reveal delivered to your inbox.